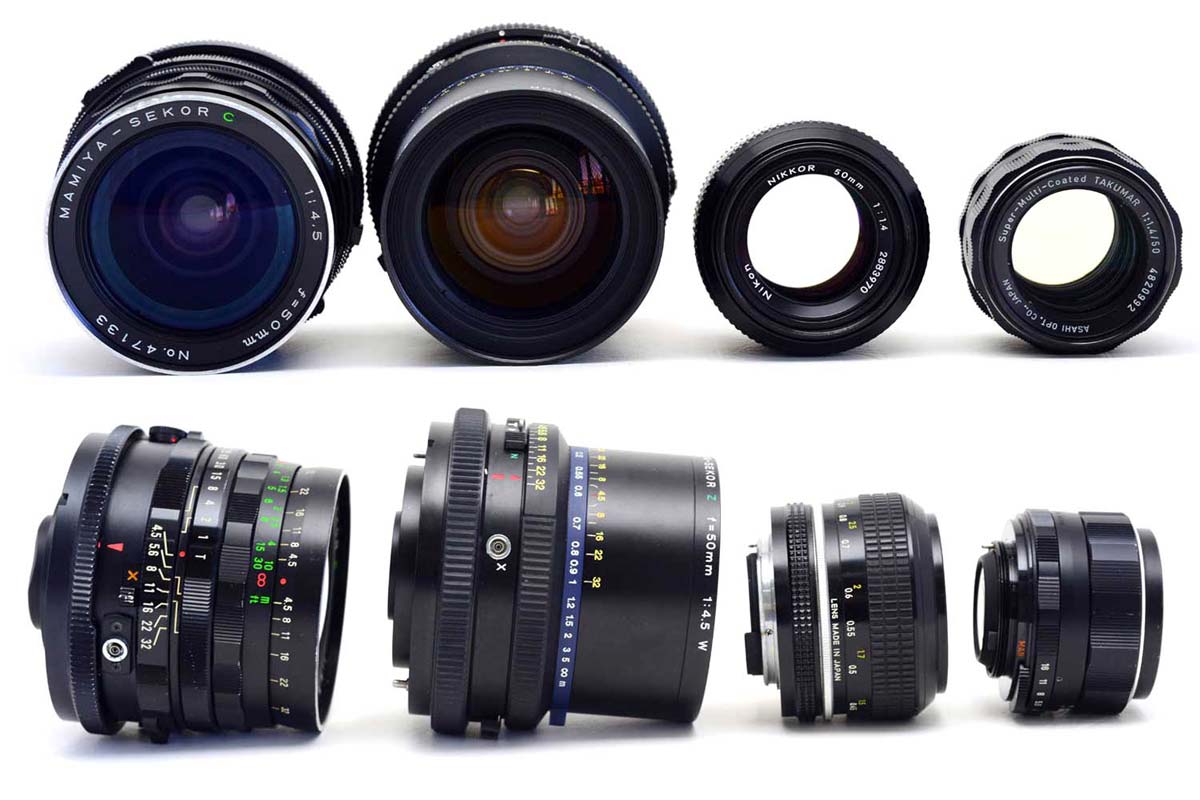 There are many manufacturers that make 50mm lenses, but are they all equal? However the first question should be " What is Equal " and is it even relevant? It really depends on what are you looking for from a lens. Each lens can yield different advantages or disadvantages depending on its design, or in this case its format (35mm, 645, 6x6, 6x7 etc). There could be a slight different angle of view, (a)symmetry and exposure or speed.

The speed of a lens is often referred to how fast it is when shooting wide open. So a F1.4 lens is considered faster than a F2.8 lens, meaning the F1.4 lens will be brighter and easier to get critical focus. This test is between a Nikon Non AI 50mm F1.4 lens, a Takumar 50mm F1.4 lens and Mamiya 50mm F4.5 lenses. With the Nikon and Takumar being F1.4 at wide open they are both considered to be much faster than the Mamiya, however the Mamiya lens is a 6x7 format lens with the others being only 35mm. That gives the Mamiya a few advantages. To me, speed is not just about how fast it is at wide open, but if all lenses were set to the same aperture does one lens allow for a faster shutter speed? I think that is a more interesting question because that would allow a lens to use a higher f-stop for greater depth of field, a faster shutter to catch better action, or better lower light ability.

Most lenses do not perform well shooting wide open (unless you've got something amazing like a Zeiss Otus 50mm F1.4, but if you have, then I seriously doubt you'd be bothered reading this article) and as digital sensors get more and more sensitive they show more and more short comings with lenses when shooting wide open. For example the Nikon 50mm F1.4 lens in this test shoots fine, wide open on a Nikon D50 (6 megapixel), but on the D800E (36.3 mega pixel) it shows chromatic aberration and loss of sharpness.

The Test Setup and Scope.

To keep thing as consistent as possible, constant lighting was used and camera white balance was calibrated for the lighting. Camera was fitted to a Gimbal, with a Remote trigger and mirror lockup was used. All lenses were set to F8. Subject was not moved between shots, however due to the size of the Mamiya lenses that did impact slightly on the composition and angle.

The Scope of the Test was to maintain constant exposure for each photo and then review the settings. So to achieve that the histogram was used (in camera) to get each photo as equal as possible while leaving the lens set to F8. This was better than just using matrix, center weight or spot metering because of the differences between each lens.

All photos displayed here are low resolution samples taken with a Nikon D800E (36.3 mega pixel). All photos have been adjusted in photoshop, however all have had the exact same filter (and settings) applied to maintain consistency.

This is a manual focus only lens and due to no automation between the M42 mount and the Nikon the lens was focused wide open and then stopped down before shooting. This is the most compact of the lenses on test.

The photo did come out a fraction darker than the other two lenses and the camera shutter speed was 1/10th of a second.

This lens showed some good depth of field behind the focal point, but not quite as much as the takumar and still showed some good sharpness. It was able to achieve a shutter speed of 1/13th of a second. So it is a little faster than the Takumar.

Without a doubt this is a brute of a lens. Huge and Heavy. This is a leaf shutter lens and that in itself can yield some very interesting benefits with faster flash sync and the ability to virtually remove vibration as there's no moving parts in the camera when you take a shot. However for this test the leaf shutter and sync were not used. (maybe a comparison of that in a future test).

In 6x7 format, 50mm is considered a wide angle lens and as such you can see the retro-focus design. Retro Focus design drastically impacts on lens symmetry (PMF) and usually results in having an impact on the depth of field and that is exhibited in the results.

Focus was performed with the lens wide open then it was stopped down to F8 to take the photo. This lens was able to achieve a shutter speed of 1/20th a second.

This test is probably not relevant to many people because the size and weight of the Mamiya lenses is considerably greater than anything else of the same focal length, so that probably puts many people off. However I find them very interesting and even though it takes a bit more time getting the photo, I'm ok with that as the results are what matters, not the method and what I photograph doesn't require fast shooting practices.

Basically it means that for the same shutter speed as the Takumar achieved (1/10th), I could set the Mamiya lens to F11 (1 stop more Depth of Field). It's very hard to complain about being able to gain another stop, or to have that extra shutter speed in low light situations.

Even though this Mamiya lens exhibited less depth of field than the Takumar or Nikon, that is something which you can overcome by other means, however inherent sharpness can not, so being able to retain fine detail holds a higher priority. Speed is also beneficial in that the faster the speed you can use the easier it is to eradicate vibration and movement which will both effect sharpness, so it is a win/win for the Mamiya.

I make no guarantees about the scientific nature of these tests. These are my observations after photographing a real world object in my studio setup. These tests were performed to help me analyze how each lens performs in a normal shooting situation (not a lab or on a test rig), so that I can then use the best lens for the assigned task.

* Coming soon * Next comparison will be 100mm or equivalent as that will move away from retro-focus design. The only slight issue will be that there is no 100mm lens for Mamiya, it's 90mm or 110mm versus Takumar 100mm and Nikon 105mm.